You are here: Home / Entertainment / D’Versions: Sticks and Stones May Irritate Zones 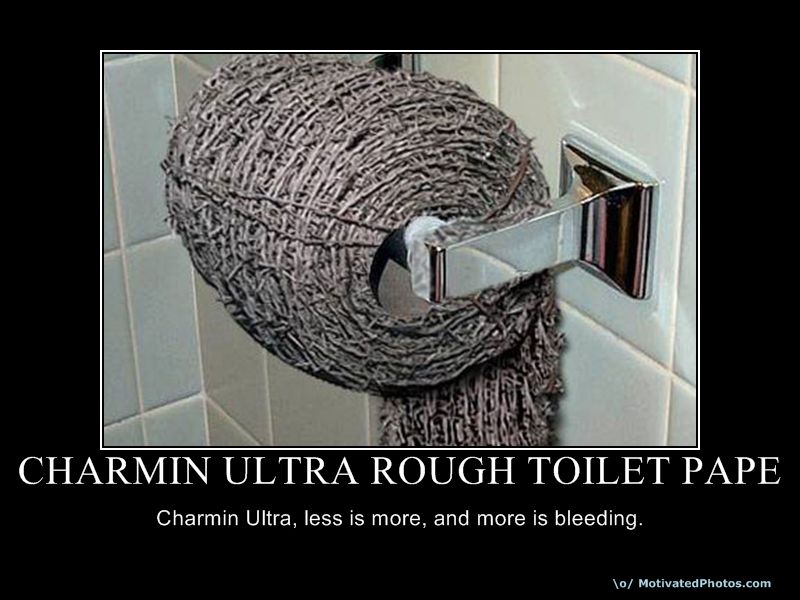 We as humans have been tied to the necessity of waste elimination since… well, since the first few hours of gracing the earth’s surface. Depending on the first meal of course, it could be calculated that if one digested a few slices of bark, mixed with some pitted berries… well anyway, you get the point.

Have you ever thought about just how long toilet paper has been around or the course of events that lead up to that proud moment where many homes across the nation were the proud displayer of their very own role of quilted, velvety, softness? Probably not I would imagine; but there is a history behind the text of every book we ever read in High School or College that has never been told, but perhaps should have been.

Some things however may just be better left unsaid. Like the notions that success and wealth can be achieved with an audacity to wipe with dollar bills, and in fact many eccentric folk have done just that in order to prove how successful they are in society, about 2% to be exact. The majority of us would scoff at such stupidity, although we might as well be doing just that with the insufficiently researched financial decisions most of us succumb to at some point or another. But Before I get too far ahead of myself here, let us blow out the sands of time and pick out a few pivotal grains to further our enlightenment of human development, if you will.

Most experts of the subject; those who will at least admit being an expert in this area, speculate that the human species used mostly sticks, dirt, and leaves with an occasional stone to cleanse between pit stops in the beginning. If you were of the coastal regions, mussel shells were the rage. It is of course only human to find the easiest and most available resources to get the job done. Easy is not always the best choice however, and in this particular case, the most comfortable.

Those of the Arab nations had their very own prescribed method, which I am sure most of us have heard of at some point or another. So I will spare you the details and suffice to say, just don’t ever shake the left hand of a man you do not know. And if by chance you ever forget which hand it is to not shake, I suggest refraining from shaking hands all together and just give a simple nod.

Rome eventually upgraded themselves to sponges attached to the end of a stick soaked in salt water. The biggest complaint within this method was those few unmentionables who forgot to rinse the sponge for the next customer. Albeit incredibly small, this may have been that unforeseen factor that exceeded the division of their society beyond recoverability. Just please don’t tell anyone you heard that from me.

The French did them one better several centuries later and invented the bidet, a simple water fountain destined for where the suns don’t shine. Although in today’s day and age the sun shines there more often there than it should. Any five-year-old that has been on the Internet once or twice knows this fact of life.

It was not until the 1700’s that the first resemblance of what we know toilet paper to be today was introduced, the daily newspaper. How appropriate this may have been in many circumstances, as I have read an article or two in my day that was just begging for such a destination in life; hell this just might be one of them. If not newspaper, then Sears catalog took a close second in popularity.

Sears may have mistaken their catalogs popularity for many years, but was set straight in the 1930’s when they changed their page mixture to a heavy, glossy composition. They received several letters of complaint from many of their more sensitive bottomed patrons. They never did change back however, and even today you would not want to be stuck on a camping trip with only a Sears Catalog in your backpack. Around this same time period that Sears was on its way out, the soft fluffy versions of toilet paper we know today were on their way in.

It took time and a few minor scrapes here and there I am certain. Okay, it took a whole lot of time and probably even more swelling, sand burn, itching, and splinters than I would care to ever imagine, but we did eventually figure things out. A little more intelligent insight and thought may have sped things along, but I certainly have nothing to complain about. I am of course reaping all the benefits from the hardship of this era in the US, which is expected for a country whose current hardships include a batch of runny coleslaw in the Family Pack Meal at KFC.

What does this history mean to you? You figure it out for yourself, friend! I am still getting over my last horrendous experience at the KFC. But I will clue you in a little bit with this thought…

Just because your fellow cave mate may have splinters in their crack: DOES NOT MEAN THAT YOU HAVE TO!