You are here: Home / Business / Corey of Deciduous Designs, Asks, How Intimate are You with Your Furniture?

Furniture is truly one of the most intimate forms of art that one can enjoy within their own home. “Space is a dynamic dialog between the furniture and the person,” says Corey. “The furniture itself interacts with the person as they touch it, sit on it, and become intimate with it in some way.” Corey is an artistry craftsmen who does not create a piece of furniture for only its aesthetics, but rather considers its functionality, utility, and ultimate, intimate interaction it will have between its users and the space.

Corey of Deciduous Designs, is a transplant from Seattle to Colorado, and has over a decade of woodworking experience. His canvas has not always been a solid wood platform however, as he was originally trained from the prestigious California College of Arts and Crafts in sculpture. After he graduated his class with honors, Corey went on to apprentice with two nationally acclaimed artists who taught him a great deal about the use of wood as an artistic medium.

Each furniture design of Corey’s could be said to fall onto a time line which tells the story of his evolution as an artist. He has learned something from each piece, which brings an almost human-like element to his art. His Sonata Chair was made while he was exploring various wood bending techniques. “I think the elegance of the curves gives this piece its a character imbued with movement and energy,” says Corey. “The challenge in making a chair lies in the complex interplay between form and function—It gets frequent and heavy use, yet aesthetically it must appear to be light and elegant.” 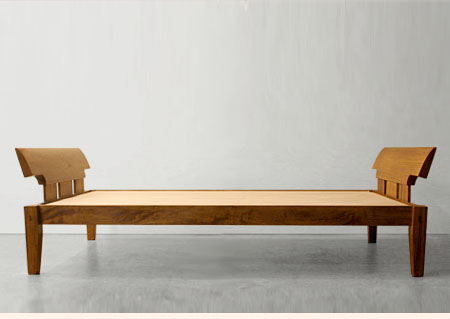 The Horizons Daybed is a rather luxurious looking and feeling piece of furniture with a twin bed inserted into the frame which doubles as a cushion. Its solid wood, rounded, sculptured armrests give it a sense of strength, while its open design and light footprint offers the gentle touch of sophistication. Corey’s inspiration comes in many forms, such as his Meditation Cabinet, which was conceived by the inspiring oeuvre of furniture artists, James Krenov and George Nakashima. “It became a sort of meditation on their work and achievements,” says Corey. “The end result was a deeper understanding of the process within a personal journey.” 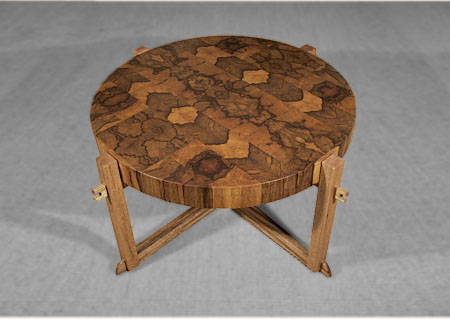 Another unique piece from Cory’s collection is his Relative Conversation Coffee Table. “This piece started while I was working with a piece of Limba wood,” says Cory. “The wood when cut had such interesting patterns.” Cory spent countless hours putting each piece together to form what would eventually become a rather intricate, dare we say Rorschach-like pattern, around the table top. “It is a perfect example of how no two pieces of wood are alike,” says Corey. “A reflection of the individuality that is present in the world around us.”

If interested in Corey’s custom, hand-made, fine furniture, visit him online at Deciduousdesigns.com.