You are here: Home / Entertainment / D'VERSIONS: U.S. Laws and the Shallow End of the Gene Pool 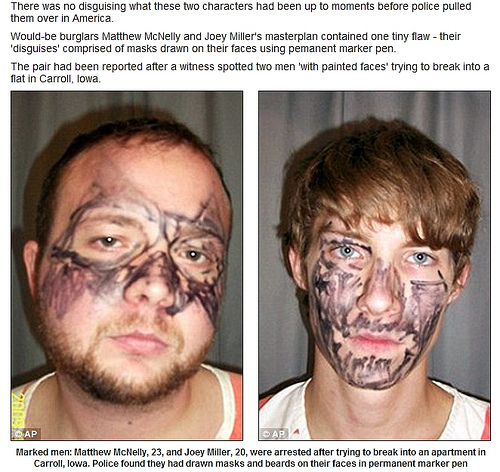 The shallow end of the gene pool is getting awfully deep around here folks and my research of some of the U.S. laws to guide American citizens down the path of righteousness and goodness is there to prove it. Throughout the course of history the U.S. has had some pretty ridiculous laws that would seem to be more a joke on human intelligence than a guide towards the accentuation of it. Let’s examine a few of these laws and discuss the frightening realization that as the tides continue to rise, it is these laws that we seem to clench to in order to sandbag this decline in morality and intelligence. Take cover, it may be time to build another Ark.

We start this editions session in Las Vegas, where the women and alcohol move almost as fast as the cash does. Over the course of their existence, it has been deemed necessary to limit the accepted attire of attendance during legislature hearings to decline the participation of anyone who wanders in wearing a phallic costume of any sort. Now you know that this probably means that at some point in Vegas’ dark history a member must have walked in wearing such an outfit. We can only assume that he was either testing his freedom of speech or advertising his first prescription to Viagra.

For those of you who have ever questioned the desperation of man and money, Las Vegas also had to create a law illegalizing the pawning of dentures for money. This would seem to be the very last straw before moving onto body organs on eBay. Speaking of desperation and panic of mutiny, Shawnee, Oklahoma has a ruling against the meeting of more than three dogs on anyone’s lawn unless the discussion is signed and proclaimed by the mayor.

New York City, the city of peace, love and unity has had to create a law against throwing a ball against someone’s head for fun. There is also an uplifting law that references anyone who commits that act of suicide by jumping off a building to be subjected to punishment by death if tried and convicted. Kind of convenient for those who actually fail, don’t you think? But for those who succeed, it then becomes illegal to arrest them as it is considered a misdemeanor to arrest a dead body.

With all the love oozing out of our cities today it is not surprising that at a point in Alabama’s history, they upheld a ruling limiting domestic violence to sticks no bigger than the diameter of the inflicter’s thumb. In Los Angeles such violence was limited to a two-inch strap unless given permission from the victim to use a wider one. On these terms we have the tender, toothless, tenacities of Arkansas residents, limiting domestic violence to no more than once a month. Isn’t that thoughtful? They give them time to heal between beatings.

On a happier note, Kentucky discourages the brainful act of carrying an ice cream cone in your pocket by a law. I would think the outcome would be punishment enough! In Wilbur, Washington it is illegal for any man to ride an ugly horse, which is also punishment enough, depending on the reference to the term “horse”. Florida has some of the most colorful and humorous of these laws, including the restriction for any man to wear a strapless gown, sing while in a swim suit or tie his elephant to a public meter without feeding the meter and I’m not talking about to the elephant; that would be illegal.

There are a few laws that have been set up to make all of our lives a little easier and enjoyable. In Pennsylvania it is illegal for a minister to perform a marriage while either the bride or groom is drunk. This would almost hinder the pronounced marriages of nearly all celebrities and businessmen during weekend trips to Las Vegas. Oregon takes a step farther and limits ministers’ use of onions and garlic before a sermon—hallelujah, no more crying and fainting during evangelistic miracle healings. And we can all rest easily passing through Louisiana now knowing they’ve passed a law saying it is legal to grow as tall as we want.

On the level of making the U.S. a little more beautiful to the naked eye, Pico River, California passed a law forbidding any woman over 200 pounds to ride a horse while wearing shorts. Only in California could this be a law. Keeping the roads safe, Idaho outlaws anyone over 88 from riding a motorcycle. Now if we could just get the ones off the road in a 5-ton SUV, we might all be a little safer. Chicago’s residents can rest assure big brother is looking out for them by outlawing dining in any place that is on fire. It has been deemed unhealthy to ones body.

Why did the chicken cross the road? They may never know in Georgia, because they do not question them or pass go, instead they arrest them on the spot and haul them away. Where they take them from there, nobody knows and probably wouldn’t want to know! Canton, Mississippi must love their squirrels because they have a law making it illegal to shoot them while in the court of law, or perhaps this would seem to be more of a respect issue we’re dealing with!

On the open plains of Texas we find the ultra idiotic idea of an anti-crime law that requires a criminal to give at least 24 hour notice before the commitment of any crime. The notice is to be delivered to the victim via verbal or written expression, describing the nature and reason for the crime to be committed. This gives the victim plenty of time to prepare their belongings and last will and testament as well as offer any assistance in attaining counseling for the felon’s social well-being. This one might actually save the tax payers some money by allowing the criminals and victims to work out their differences without the involvement of worthless government programs and prison/holding facilities.

To make this idea work better, they should mix in the “Make My Day” Law from Colorado and Oklahoma which says anyone caught in an individual’s private home with attempt to harm can be stopped by deadly force. We could have these criminals disposed of faster than an “I Love Hillary” button found on a street corner in Abilene, Texas. But then again, it would have to be referenced that the break-in or invasion was considered to be a “surprise entry” for the ruling to be legal. It all comes down to having the right to take someone’s life. In Illinois, once your breathe leaves your body it is no longer considered your property. This means the last breath you ever take may be owned by the person who forcibly took it.

What is the solution to all this insanity?

Pure and simple common sense and human decency is all that each of these laws represent. And unfortunately a few even show a lack of disregard and humanity by allowing a centimeter too much over the line that should be drawn. There are only two people who can do something about all the wrongs of the world, you and me. A few government officials and their ridiculous laws do not mean much without the majority of us enforcing them. We need to actually take the word “we” and put it to use.

Everyday there are thousands of people who are thrown into a domestic violence situation and every neighbor who hears the disturbance just figures the next person will do something about it. Every morning a businessman falls to the street clenching his heart to find the majority of people pass by, before one individual actually steps in to provide aid and call for help. We are in this together and if you think that the rules we have created are going to be your salvage in life you are seriously mistaken. It is going to be you and I hand in hand that will walk out of here in one piece.

…God (or whatever deity your beliefs allow you to entrust) bless America and every nation who surrenders their compassion for living things and the rights and freedoms that every creature so deserves!