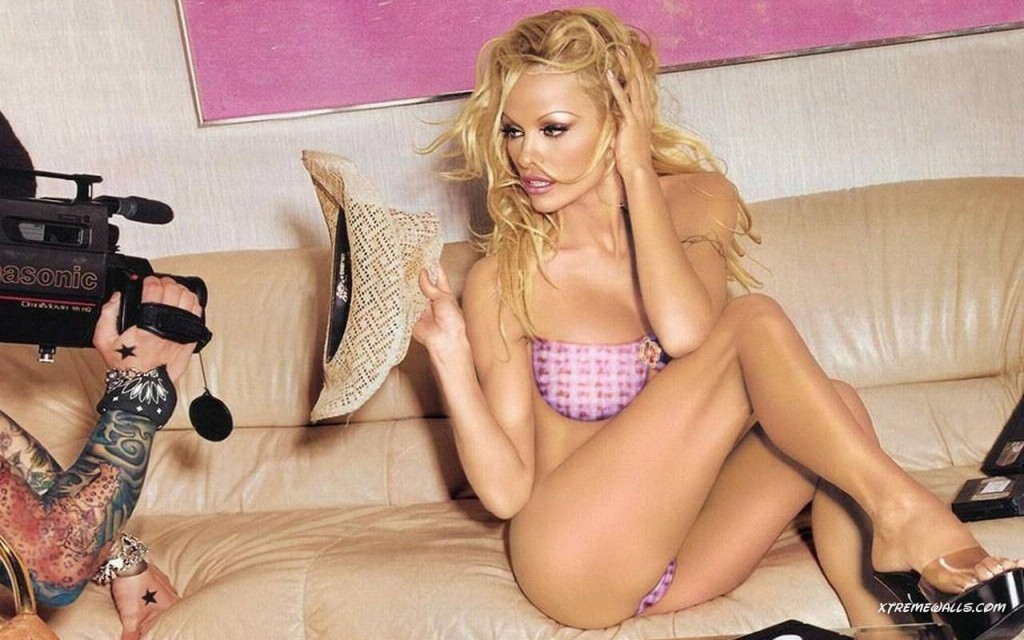 Pamela Anderson has been criticized since her stardom for her choice in men. Some critics claim that she falls in love too quickly like a glazed eye school girl, following her heart rather than looking at the reality of what a working relationship is supposed to be. Her Relationship with Tommy Lee began as one such school girl fairy tale. For those of you too young to remember Tommy Lee, he was the drummer and youngest member of the 80’s hair band, Motley Crue. Pam had only known Tommy four days before she married him. They met the day after Valentines Day, and were married February 19th of 1995. What better way to celebrate the month of love than with an impromptu marriage with a hard rocker who has tossed more groupies than Roseanne Barr has tossed Twinkie wrappers.

While most could have guessed the couple would never make it, Pamela claimed that she was never more happy and miserable at the same time when she was with Tommy. He was certainly a handful, as the couple could have practically had their own hit television show featured at the Los Angeles County Courthouse for the number of times they made an appearance there. Their first starring role was as a rambunctious honeymooning couple battling a pornographer for the sale of their X-rated honeymoon home video. A bit down the road, the couple became a tragic black comedy of domestic abuse, as Tommy pleaded “no contest” for striking Pamela during a fight over a frying pan of all things.

The climax to this non-fairytale-like relationship ended in the true fashion of a tragic drama when the custody of their two sons had to be decided over a whirlwind of accusations of abuse, alcohol, and lies. Tommy describes his relationship with Pamela best with his famous quote, “There’s always a storm cloud lurking in the distance, waiting to fu** up everything good and perfect.” While their relationship was certainly far from perfect, Pamela would agree with there being some good parts. She was rumored to have been in the midst of giving him a second, err, make that his third, fifth, seventh… or more like his 800th chance this summer. Quite frankly, I lost count at number five, but they were living together again and hinting that this may just be the 801st charm they needed.

But as their past would dictate, by the time this article is published they may have already been engaged, married, divorced, engaged again, married, reconciled, annulled, and then sleeping together casually. Pamela is taking her time to get to know Tommy the way she should have from the beginning. She appears to be waiting to see if he is going to go bipolar on her again, head spinning around, tattoos melting off his body, over some dilemma such as whether the cooking temperature of their Christmas bird should be taken from its neck or its a**. But for the sake of their kids, Brandon (11) and Dylan (10), we hope they can keep it together one day. But this may not be the year.

While rumors tend to surround Pamela like Geritol at a Motley Crue concert, last we heard, the couple was once again separate and on the prowl. Tommy has been sighted getting his HID-on with Daisey De La Hoya, while Pamela is rumored to be getting close with a member of the Abu Dhabi royal family. While we can’t attest to any of these rumors, this is typical of the soap opera Pammy has been living and her choice of men seems to be a partial force to some of these outlandish tales. But not every guy Pamela has dated has been bad for her.

After Tommy, supermodel Marcus Schenkenberg stepped-in asking Pam for her hand in marriage. While he was by all accounts a pretty decent guy, Pamela has always preferred the bad boys. It wasn’t long before pretty boy Schenkenberg was out and Kid Rock was in and life with the Kid was certainly no bowl of cherries. By 2003, the couple had already been engaged and broken up more times than a closet bound postal service transvestite. With much the same on again, off again routine as she experienced with Tommy, the Kid and Pam went through a series of reconciling acts until July 18th of 2006, of which it was announced the couple would wed on the 28th of that same month.

Kid pulled up his favorite ratty pair of jeans, while Pam dawned her favorite white string bikini and they were married on a yacht near St. Tropez, France. After what seemed forever as celebrity marriages go (4 months), the couple split under irreconcilable differences. It was later rumored the split was over a Kid Rock temper tantrum over a short scene of Tommy and Pam’s X-rated honeymoon video shown in the movie, Borat. But all is good in love and war, as Rick Solomon swooped in soon after to console his friend of 15 years and ended up marrying her in the process.

The Sex Tape Super Duo, Pamela with her Tommy video and Rick with his Paris Hilton romp, promised one heck on an encore performance for fans if they could have stayed together long enough to have dragged out the home video camera. But it was to no avail. After their October 6th, 2007 wedding, multiple disagreements, break-ups, and make-up sessions, their relationship ended rather abruptly December 14th, just two short months after their “I do”. Where did that leave Pammy? It basically left her back with her five children, Dylon, Brandon, Tommy, Poncho (right breast), and lefty (you guessed it). It also left her with a rather philosophical view of her life, as was seen in this blog entry she posted on her website just a few days after her split with Solomon:

“The choices I have to make now are about quality of life and meaning. Not about money or fame for no good reason. I know I’ve made a lot of mistakes. But no regrets—Just living such a huge dream… I’m blessed. So many options. I can’t complain. I can be confused.”

While Pamela’s relationships have been a guiding force to who she is, there is actually so much more to her than we have elated to so far. She is confident, insecure, intelligent, naïve, a good Mom, loved, hated, grounded, and sometimes a little “whacked” (as she has been known to call herself). She truly sees her life as being a giant roller coaster and she has been in the front taking the brunt of all its ups and downs, but enjoying every minute of it. While She is confident in the path she has chosen, she has also hinted to certain insecurities about herself, such as her sex symbolism. Pam does not like to see herself in the mirror or watch herself on television. It is somewhat of a phobia, but it shows her ultimate fear of her own mortality as a youthful blond bombshell.

She has reached her forties, and while she is still beautiful, her Hollywood star is more than half spent. Something that every Hollywood starlet must face one day. When Pamela turned forty, she wanted to do it up right by declaring a new found celibacy. She then sealed it with a small tattoo of an unopened clam placed on the small of her back. She called this her new religion, of which she hasn’t been faithful to since she was around eight years old she claims. Most would have to wonder how this religion is working out as she continues to be seen with new men, but her tattoo artist has been quoted as waiting ready and steady for that call to “open that clam.”

Well, the joke is on him because Pam announced this summer that she was going to have all her tattoos removed. That will take care of that pesky clam, as well as rid a few other pesky memories, such as Tommy, who Pamela claims gave her Hepatitis C after sharing needles for some of her artwork. Her more momentous tattoos to date are still her “Tommy” tattoo, which was later changed to “Mommy”, and her barbed wire around her left arm, symbolic of her film Barb Wire.

To all you vegans who look to Pammy more for her words of wisdom on animal rights, than the wizardry of Poncho and Lefty swaying over a tropical breeze. “You can control what goes in your mouth, they say,” explained Pamela during an interview with Radar magazine. “However, we’ve all made bad choices.” Yes Pammy, I’d say this quote works for you on a couple of fronts!