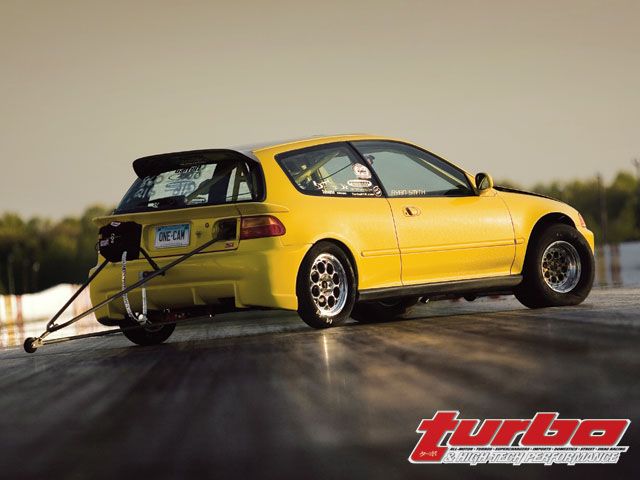 “I was 5 when my dad drove the car into the driveway, all I can really remember about it was saying, Cool,” reminisces Ryan about his Honda drag racer back in its days as a daily driver. Keep in mind, this was back in the 80’s when the phrase, ‘There is no replacement for displacement’ was still very truthful. Today, we know that a Garrett turbocharger can change the rules of small displacement engagement with just the turn of a few bolts. But Ryan, who was ahead of his time, knew what a gem he would one day inherit and kept a close eye on Honda engineering for the next couple of years. But Ryan would never realize the actual true potential of the car until a skiing accident left his leg in a cast and eyes buried in the pages of sport compact tuner magazines.

Ryan began to plot the resurrection of the faithful daily driven Honda before he could even drive. As many young tuners, Ryan began his quest with a simple body restoration to rid the Civic of body rot, and has found himself where he is today, with a 568 WHP fire breathing dragon, puffing 34 psi through its renowned GT35R turbo. It was not an easy road to reach the 500 WHP goal he had set for himself. In fact, his first build only produced 260 horses, leaving the remaining 240 ‘combustionally’ challenged ponies suffocating in the Honda’s stock iron block until RLZ Engineering introduced a better ‘head’ onto the Civic’s shoulders. But that’s getting a little ahead of his story. 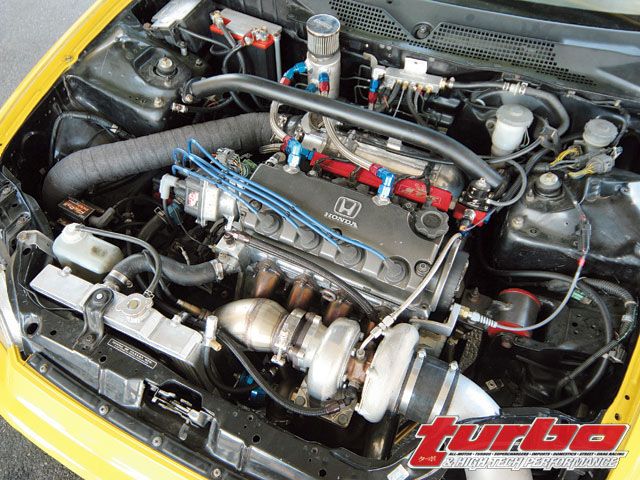 Ryan initial Civic tuning was comprised of an Apexi turbo, 3” exhaust, homemade boost controller, and mostly stock tranny. Ryan’s Honda Civic could run 13’s all day long at the track with this concoction. Add in a pair of K-Sport Lower control arms and Progress Custom Valved Drag coilovers, and the Honda was able to see 11.9 @112 for the first time. This is when the need for speed really hit Ryan and he decided to transform his street racer into an all out drag queen (of the tuner variety).

Using basic hand tools and his driveway as a garage, he installed a Garrett GT35R turbo as the base power from which he would build upon the rest of his transformation. Unfortunately, a flatulent monkey hopped on his back when the installation was complete and the Civic became bogged down with a waning power band that ceased to produce the numbers that Ryan had hoped for. Ryan can still remember staying up days in a row trying to get prepped for a dyno, only to be set back to square one if the Honda refused to rev over 3,000 rpm.

Thanks to a set of extensively machined RLZ heads and a few tweaks of the Honda’s AFC tuning, the cars disappointing 100 rpm power band leaped to 3,000 rpm and the car scorched the rollers at a very long awaited 568 WHP. This is all with the single cam mind you, and over two years of trial, error, sweat, and blood to pull out such huge numbers from a relatively stock engine block. Life on the black top is not always a Kirkey racing seat of roses, as Ryan can attest to.

Even with the impressive gains that Ryan has achieved thus far in his build, the fat lady has yet to of sang for him. The Honda is far from done in Ryan’s opinion. In fact, he didn’t even have the car back in its driveway before beginning plans to break into the 600 WHP barrier. How could he possibly achieve more horsepower out of an EG single cammer you ask? By putting the mighty Civic on a diet of less fatty plastics and metal and more nutrient dense nitrous oxide of course.

Ultimately, Ryan would like to take the Civic to professional ‘Hot Rod’ status, matching up with the big dogs running in access of 800 WHP. He would also like to own a race team, with a field of cars to choose from. But for now, Ryan is just glad that he grew up in a family who is supporting his dreams and preferred Japanese imports over the inferior 80’s domestics. “That’s why I don’t have a sister named Bobby Sue and a Mustang,” thankfully exclaims Ryan.

For those of you EG fans who would like to build up a similar ‘not-so… mellow yellow Honda’, we took the liberty to fill out your Santa’s list for the coming year (a.k.a. specification sheet)—hope you’ve been ‘nice’…

GS-R transmission (Out of an Integra)